He's a sweet, intelligent dog who is devoted to his people. And as one of the smallest of the toy breeds, he's well suited to apartment or condo living because they readily take to potty pad training, require very little exercise, and are perfectly content sitting on the couch with you and will happily trot beside you as you walk through the house. Wherever he lives, the Maltese is responsive to his environment and makes an effective watchdog. Maltese do not shed, are very gentle and were recommended to us by our dermatologist when our daughter developed severe allergies to dogs and cats. Maltese and Schnauzers are the only two breeds that our daughter can be around. She usually sleeps with at least two and is perfectly fine.

Is this the Puppy for me?

Although they look delicate and aristocratic, Maltese can have a lot of energy as puppies. They learn quickly if rewarded for their efforts. Because they have a long history as companion dogs, Maltese require a lot of human attention and suffer from separation anxiety. If left alone for hours each day, they can bark and become destructive if you don’t provide toys, music, or other entertainment. Fearless and friendly, Maltese assume that everyone they meet (human or animal) is a friend. Sweet and cute, they're widely known for always getting their way, even with people who have no intention of spoiling them. This is due in part to their big, expressive eyes that they use to communicate. You can tell what a Maltese is thinking from across the room.

The one thing that Maltese are known for, besides their beautiful coat, is their absolute devotion and sensitivity to their owners. This sensitivity makes them excellent therapy and service dogs. I, personally, have placed 6 Maltese in homes where they were trained as service dogs. One was for a 2 year old girl who had seizures. The Maltese was small enough and gentle enough to be with the little girl 24 hours a day and she was trained to alert her family if a seizure was about to happen. Another was for an elderly woman who also had seizures. Her Maltese was trained to push a button which called for help in case of emergency. Maltese are very devoted to their owners.

The Maltese is a natural ham with an outgoing personality. Because they are so people-oriented, they are easy to train and respond to positive reinforcements such as food rewards, praise, and play. However because they are very sensitive, if you spank or severely scold a Maltese, they will pout, hide, and sometime fear you. You must use a consistent, gentle, but firm training approach with them.

Maltese require daily grooming if kept in a show coat (long, flowing to the ground hair) or trips to the groomer 2-4 times a year if kept in a puppy cut (fluffy, bouncy but not super long). Most people choose to do a puppy cut, weekly baths, and professional grooming a few times a year. If you want to do most of the grooming yourself, see more information on our grooming page here. You can make their grooming routine as simple or elaborate as you want. For more information about grooming, see our videos and info here.

What about the eye stains?

Some Maltese have severe eye stains and this is due in part to genetics which determines the size of the tear ducts. My Maltese, in general, do not have the tear stained eyes. The only time my puppies have watery eyes is 1) when they are teething as puppies 2) if they are sick or 3) if it is really windy and they stay outside all day. I do nothing special other than giving them only bottled or filtered water to drink and feeding them about a tablespoon of yogurt once or twice a week (whenever I am eating it.)  Some water contains too many mineral, chlorine and other chemicals that can change the eye chemistry and cause the read tear stains. The second thing that cause the red tear stains is a bacteria. This requires a prescription from your veterinarian to clear up so don’t leave them outside if it is really windy.  Last, if you notice your puppy is feeling under the weather take him to the vet. Oh—and keep the hair trimmed so it doesn’t poke him in the eyes. If you had a hair poking you in the eye all day, your eyes would water too!

Maltese are one of the smallest of the Toy breeds. The AKC breed standard for Maltese is from 4 to 7 pounds. Some Maltese are slightly smaller and others are slightly larger (and maybe a little pudgy like me.)

What to worry about

Some Maltese have delicate digestive systems and may be picky eaters. The biggest worry after getting your new puppy home is making sure she eats every 6 to 8 hours. Maltese puppies are so tiny that they can easily die from hypoglycemia if they do not eat every 8 hours. You can NOT feed this breed any old dog food. Their stomachs are so small, and they eat so little at a time, that you MUST feed them very high quality ingredients at each meal. I HIGHLY recommend putting them on the BARF menu for all of their meals at least until they are over 3 pounds and 6 months old. See feeding information here.

How much your adult dog eats depends on his size, age, build, metabolism, and activity level. Dogs are individuals, just like people, and they don't all need the same amount of food. It almost goes without saying that a highly active dog will need more than a couch potato dog. The quality of dog food you buy also makes a difference — the better the dog food, the further it will go toward nourishing your dog and the less of it he will eat. For more information about feeding see our page on the BARF diet and feeding page here.

In addition, Maltese are notorious for being picky about where they potty. If it is too windy, rainy, or cold, they will refuse to potty outside. However, if you provide a litter box, or a potty pad, they will readily go on there as they have a natural instinct for cleanliness.

Maltese are generally healthy, but like all breeds, they're prone to certain health conditions. Not all Maltese will get any or all of these diseases, but it's important to be aware of them if you're considering this breed.

·        Patellar luxation: The patella is the kneecap. Luxation means dislocation of an anatomical part (as a bone at a joint). Patellar luxation is when the knee joint (often of a hind leg) slides in and out of place, causing pain. This can be crippling, but many dogs lead relatively normal lives with this condition.

·        Portosystemic liver shunt: This renal disorder occurs when an abnormal vessel causes blood to bypass the liver and therefore not be cleansed.

·        Progressive Retinal Atrophy (PRA): A degenerative eye disorder. Blindness caused by PRA is a slow process resulting from the loss of photoreceptors at the back of the eye. PRA is detectable years before the dog shows any signs of blindness. A reputable breeder will have dogs' eyes certified annually by a veterinary ophthalmologist.

·        Hypoglycemia: This malady is caused by low blood sugar. Some of the signs may include weakness, confusion, a wobbly gait, and seizure-like episodes. If your dog is susceptible to this, talk to your vet about prevention and treatment options and see our page on Hypoglycemia here.

·        White Dog Shaker Syndrome: This disorder that primarily affects white dogs. Signs of the condition are tremors over the entire body, lack of coordination, and rapid eye movements. Episodes usually start when the dog is six months to three years old and is stressed or overly excited. This condition isn't painful and doesn't affect the dog's personality. If you suspect your Maltese has White Dog Shaker Syndrome, talk to your vet about treatment options.

·        Collapsed trachea: Some dogs are prone to this condition, in which the trachea, which carries air to the lungs, tends to collapse easily. The most common sign of a collapsed trachea is a chronic, dry, harsh cough that many describe as being similar to a "goose honk." Collapsed trachea can be treated medically or surgically.

·        Reverse sneezing: Sometimes confused with a collapsed trachea, this is a far less serious condition and lasts only a few minutes. Reverse sneezing primarily occurs when your dog is excited or tries to eat or drink too fast. It also can occur when there are pollens or other irritants in the air. Secretions from the dog's nose drop onto their soft palate, causing it to close over the windpipe in an automatic reaction. This can be very frightening to your Maltese, but as soon as he calms down, the reverse sneezing stops. Gently stroke his throat to help him relax.

The Maltese has been a treasured companion for over 2000 years and is one of the oldest breeds of dog in recorded history. The Maltese (also known as the ‘Bichon Maltiase’) is the most ancient toy breed of Europe, hailing from the Mediterranean island Malta, an ancient trading port. The first written evidence of the Maltese comes from the third century B.C.

The breed’s origins are unknown; it may descend from Spitz or an Asian breed such as the Tibetan Terrier. The small, white Maltese remained isolated on the island of Malta for centuries and hence stayed true to breed. Publius, Roman governor of Malta in the early first century A.D, had a Maltese named Issa who was immortalized by poet Marcus Valerius Martialis: "Issa is more frolicsome than Catulla's sparrow, Issa is purer than a dove's kiss. Issa is gentler than a maiden. Issa is more precious than Indian gems"...Lest the last days that she sees light should snatch her from him forever, Publius has had her picture painted.

Eventually, they were exported throughout Europe and became popular with the upper class, purportedly including Josephine Bonaparte, and Marie Antoinette. By the 15th century, Maltese had found a secure place in the arms and hearts of French aristocrats.

During the reign of Henry VIII, Maltese arrived in the British Isles. By the end of the 16th century, the Maltese had become a favorite pet for noble and royal ladies. The little dog was a favorite of Queen Elizabeth I, Mary Queen of Scots, and Queen Victoria. Numerous painters, including Goya and Sir Joshua Reynolds, included these small dogs in their portraits of beautiful women.

Although Maltese survived the fall of the Roman Empire and the Dark Ages, the Maltese was nearly destroyed in the 17th and 18th centuries when attempts were made to breed him to be the size of a squirrel. After this nearly disastrous experiment, breeders mixed poodles, miniature spaniels, and East Asian miniature dogs with the breed to save it. This resulted in the Maltese becoming so varied that several new breeds were formed. It is thought by some of the many breeds formed during this time was the Bichon Frise, Bolognese and Havanese breeds.

English breeders developed the Maltese as we know him now. Many of the Maltese in the U.S. today trace their heritage back to English imports. Maltese were first seen in the U.S. in the late 1800s and recognized by the American Kennel Club in 1888. They were entered in the earliest Westminster Kennel Club shows in the 1870s.

The number of Maltese dogs registered with the AKC grew very slowly until the 1950s. Since then, the breed has become quite popular. Maltese are one of the most popular breeds among spectators at dog shows, and frequently win the Toy Group. They also have an excellent record in the "Best in Show" competition.

Today it is a popular show dog. 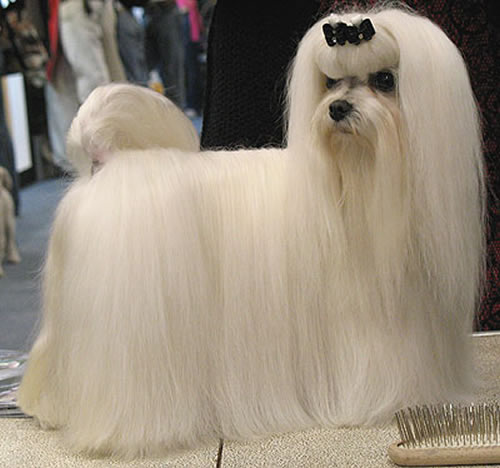