Many people have had great success by tying a jingle bell on a long ribbon or piece of yarn and tying it to your door knob. When your puppy is little, you will jingle the bell each time you open the door or you will use your puppy's paw to make the bell jingle while saying "go potty" or "potty outside."

Within 4-6 weeks your puppy will know that she can 'ring the bell' if she needs to go outside. Yes, she will sometimes ring the bell just because she wants out to play instead of potty but this is great because this means she KNOWS how to get outside....now all you have to do is give her 5-10 minutes to potty and if she doesn't simply bring her back into the house.

House training you﻿r puppy is about consistency, patience, and positive reinforcement. ﻿The goal is to instill good habits and build a loving bond with your pet.

It typically takes 4-6 months for a puppy to be fully house trained, but some puppies may take up to year. Size can be a predictor. For instance, smaller breeds have smaller bladders and higher metabolisms and require more frequent trips outside. Your puppy's previous living conditions are another predictor. You may find that you need to help your puppy break old habits in order to establish more desirable ones. And while you're training, don’t worry if there are setbacks. As long as you continue a management program that includes taking puppy out at the first sign he needs to go and offering him rewards, he’ll learn.

When to Begin House Training Puppy--Experts recommend that you begin house training your puppy when he is between 12 and 16 weeks old. At that point, he has enough control of his bladder and bowel movements to learn to hold it.

Steps for Housetraining Your Puppy-Experts recommend confining the puppy to a defined space, whether that means in a crate, in a room, or on a leash. As your puppy learns that he needs to go outside to do his business, you can gradually give him more freedom to roam about the house. When you start to house train, follow these steps:

Using a Crate to House Train Puppy-A crate can be a good idea for house training your puppy, at least in the short term. It will allow you to keep an eye on him for signs he needs to go and teach him to hold it until you open the crate and let him outside.

Here are a few guidelines for using a crate:

Make sure it is large enough for the puppy to stand, turn around, and lie down, but not big enough for him to use a corner as a bathroom. See the video below. 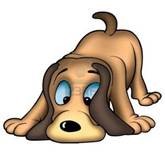 Signs That Your Puppy Needs to Eliminate-Whining, circling, sniffing, barking, or, if your puppy is unconfined, barking or scratching at the door, are all signs he needs to go. Take him out right away.

House Training Setbacks-Accidents are common in puppies up to a year old. The reasons for accidents range from incomplete house training to a change in the puppy’s environment. When your puppy does have an accident, keep on training. Then if it still doesn’t seem to be working, consult a veterinarian to rule out a medical issue.

Keep the following do's and don'ts in mind while housetraining your puppy: